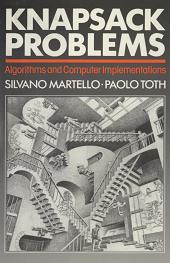 This book presents a state-of-art on exact and approximate algorithms for a number of important NP-hard problems in the field of integer linear programming, which we group under the term knapsack. The choice of the problems reflects our personal involvement in the field, through a series of investigations over the past ten years. Hencethe reader will find not only the "classical" knapsack problems (binary, bounded, unbounded, binary multiple), but also less familiar problems (subset-sum, change-making) or well-known problems which are not usually classified in the knapsack area (generalized assignment, bin-packing). He will find no mention, instead, of other knapsack problems(fractional, multidimensional, non-linear), and only a limited treatment of the case of generalized upper bound constraints.